This article was published in 1973, a full 3 years after Jones’ Physics Today article, so there really is no excuse. If Higbie didn’t catch it, then the editors at the American Journal of Physics should have. Their current statement of editorial policy includes

Technical correctness is necessary, and contributions should … significantly aid the learning of physics.

Higbie’s contribution, however, meets neither criteria. He leads off with

As I was riding my 650 cc motorcycle, I discovered a curious fact which might be useful to those who would like to have an everyday example of gyroscopic action.

The curious fact he discovered is that is necessary to countersteer his 650 cc motorcycle, and the rest of the article is devoted to explaining what countersteering is and how gyroscopic precession works. No mention is made of any other phenomenon.

Thus, without so much as a back-of-the-envelope calculation or controlled physical experiment, he asserts that gyroscopic precession is how and why big bikes such as his 650-cc machine countersteer, and even goes so far as to call it gyroscopic turning. This implies that single track vehicles without spinning wheels can’t or don’t countersteer. How does he propose that such vehicles generate the roll moment necessary to negotiate a turn?

This example of gyroscopic motion is sufficiently involved and “relevant” that it could be useful in first-year college or high school courses.

Sure, unless anyone checks the math and discovers that gyroscopic precession is neither necessary nor sufficient for a bike to countersteer. Then this becomes an example of how misconceptions get perpetuated. 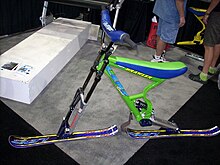 As with most endeavors,  there are plenty of ways to make bicycle science bad. There are a few ways, however, that seem to be more popular than others. Here are some of the most common:

Most of the examples itemized in the posts on this site make this mistake. The UW-Madison Physics Department writes as though it were in a vacuum, while Physlink.com cites a useful work and then comes to the opposite conclusion of the author.

Despite flaws in its final analysis, Jones’ 1970 Physics Today article demonstrates the limited role of gyroscopic effect pretty clearly . Thus, anyone writing after 1970 that bike stability or ridability derives solely from gyroscopic effects or that bikes are almost impossible to ride without gyroscopic effects simply hasn’t done their homework.

By far, the most popular law to flaunt is that of angular momentum, as demonstrated by Mental Floss.

The next most popular law to flaunt is that of linear momentum, as demonstrated by Rider Education of New Jersey.

3. Providing no equations or calculations, no instrumented physical experimentation, or any other sort of validation

This is more of a problem with articles in supposedly peer-review journals, such as in the European Journal of Physics.

Certainly, not every article is intended for a technical audience, but every assertion still needs to be based on reality. Claiming the gyroscopic effect is responsible for so and so without even doing a back-of-the-envelope calculation to show it is possible is just blowing smoke.

Direct human observation is notoriously unreliable, especially of small behaviors combined with large behaviors, such as the steer angle of a speeding motorcycle. Even the Wright brothers observed that most bicycle riders do not realize that they apply a steer torque to the left in order to turn right.

It is not exactly clear what Everything2 is about, but it is not Wikipedia, and so does not appear to have any requirement for assertions to be supported by reliable sources or consensus among contributors . The article about gyroscopes, is a good example of what that yields:

Here we have more perpetuation of the misconception that spinning wheels somehow resist falling over and even turning. In reality, large external moments, from gravity and the rider, are applied that easily alter the angular momentum vector of each wheel.

I would try to contact Everything2 about this problem, but they required anyone to Log in or register to write something here or to contact authors, and I need another login id and password like I need a hole in my head.

While it is laudable to try educating new riders, it is never helpful to give them wrong information, as TotalMotorcycle.com does in their Beginner’s Guide to Motorcycling Section Five 1/2: Counter Steering, Push Steering the Easy way.

As the front motorcycle tire spins, the force of the spinning causes the motorcycle body to want to stay upright and be stable.

This is wrong in several ways:

1. inanimate objects, such as motorcycle tires don’t want anything, but that is really a stylistic issue.

2. the bigger problem is the suggestion that the spinning of the tire keeps it upright. If the front wheel can not steer, no amount of spinning could keep it upright, and if it can steer, the rider and at least three other factors, besides gyroscopic effects, tend to steer it in the direction of the lean: geometry, specifically trail; mass distribution; and tire mechanics.

Why go out of the way to invoke some magical property of spinning wheels, when the critical contribution is the ability of the front wheel to steer?

A recent news article on Phys.org tries to present some of the history of the technical development of bicycles. It goes off the rails, however, when it touches on balance:

Then comes the phenomenally complicated bit: not falling off. “Only a few people really understand how balancing a bicycle works,” says Philip Garsed, a PhD student in electronic engineering whose passion for bicycles developed into his recent talk at the Cambridge Science Festival, titled How the Bicycle Got Its Spokes. “There are lots of effects interacting with each other. One of the most interesting is the gyroscopic effect. If you have a wheel spinning around an axle and then try to tilt the axle from side to side, you get this weird effect that makes it resist that change. On a bike, that tends to keep you upright and for quite a long time it was thought that this was the reason why a bike can be balanced. It was then proved that it was not actually necessary – someone stuck a flywheel that rotated in the opposite direction on to the wheel and eliminated the effect, but the bike was still rideable. I have a book that explains the details of bicycle balance. It’s hundreds of pages thick and it helps to have a physics or engineering degree to get your head around it.”

1. It is not phenomenally complicated: bikes balance by being steered in the direction they are leaning.

2. Anyone who has read the second paragraph of the Wikipedia article knows this.

It would seem that if you thought something was phenomenally complicated, you would avoid speaking publicly about it, or at least check with someone who does understand the topic before you do.

I posted a comment at the bottom of the article and emailed Philip Garsed at the University of Cambridge, but have received no reply.

The original response to this question was just terrible.

Because modern bicycles are equipped with a pair of  gyroscopic stabilization devices that require the motion of the bike in order to operate. These devices are known as “wheels.”

It implies that the reader is a dummy for not knowing this obvious “fact” and that non-modern bicycles maybe didn’t have a pair of wheels.

The revised response is better but it merely discards one misconception for another. After citing the David Jones Physics Today article from 1970 , the author writes:

So why do bikes stay up? The answer is: trail.

While it is true that both trail and gyroscopic effects can contribute to the self-stability of a bike, it has been demonstrated, by Kooijman, et al., in their 2011 Science article,  that neither trait is necessary nor sufficient by themselves for self-stability.

The steering torque necessary to steer in the direction of the lean can be provided by the rider, or, in some cases, by some combination of mass distribution, geometry, gyroscopic effects, and tire properties.

The revised response ends with

On the bike path of progress, you have to expect the occasional bum steer.

They have provided two bum steers so far. Perhaps they can get it right on the third try.

Under the banner of “The Wonders of Physics”

The actual role of gyroscopic effects in motorcycle and bicycle behavior is due instead to torque-induced precession, and this can occur in a couple of ways when the bike is rolling forward:

1. Applying a torque to the handlebars about the steering axis causes a rolling moment. For example, steering left causes a roll moment to the right. Vittore Cossalter, in his Motorcycle Dynamics​ book, describes how this can be useful in motorcycle racing.

2. Leaning the bike causes the front wheel to steer in the direction of the lean. This can contribute to, but has been shown to be not necessary​ for, the self-stability of the bike. Kooijman, et al., demonstrated this in their 2011 Science article.

The rear wheel is prevented from precessing as the front wheel does by friction of the tires on the ground, and so continues to lean as though it were not spinning at all. Hence gyroscopic forces do not provide any resistance to tipping.

I have sent an email message to the address listed at the bottom of the article, randall@physics.wisc.edu, but have not heard back.

The wonders of physics indeed. I wonder who comes up with this stuff?