I suppose I should apologize for the long silence, since continued postings are what drives blog traffic, but things have been fairly quite in the world of bicycle science, and I didn’t have anything that needed highlighting. Or so I thought.

It turns our that our old friend Calvin Hulburt, first mentioned here back in 2014, has remained busy since then. He posted a long screed with pictures and everything in answer to questions on Quora here and here, and even gets a little feisty on KQED when he refers to the current active group of bicycle dynamics researchers as “Whipplites”.

(Yikes! They’re like mushrooms after a rain. Additional instances include ScienceLine, ScienceMag, DiscoverMagazine, MotorcyclistOnline, and MentalFloss.)

Sadly, he still has nothing new to offer. Despite our pleading with him on the  Single Track Vehicle Google Group to make a testable prediction, he declines to do so. Instead, he simply continues to push his theories in venues where they can go unchallenged.

I guess now the task includes creating user IDs on each of those sites, logging in, and posting a reply. Sigh.

The discussion has been busy on KQED, and Calvin has finally made some testable assertions, but we seem to have come to an impasse. One of these assertions is that the net ground reaction force in a lean is always aligned with the midplane of the bike, and this means that it cannot create a steering torque via a finite trail.

I counter that this is only true if the bike is modeled as a point mass on a massless rod. If the mass is distributed, as on a real bike, the net ground reaction force no longer aligns with the midplane.

We need to look at equations to sort things out, the most efficient way to do that is with attached images, and KQED keeps deleting my comments that contain images, so I’m posting them here instead.

So the equations do support the notion that the net ground reaction force is perfectly aligned with the midplane of a bike, if the bike consists of a point mass on a massless rod. 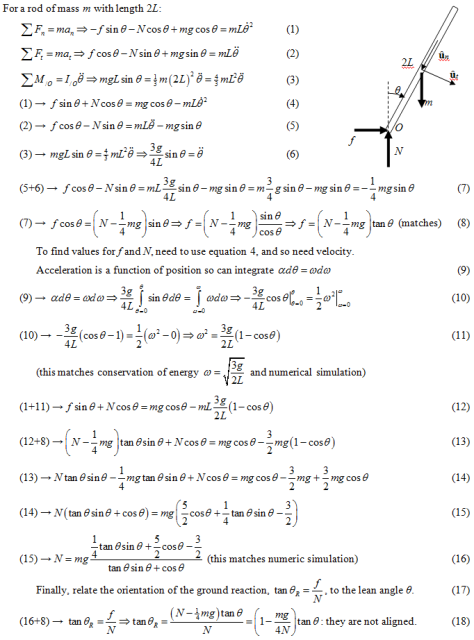 So the equations do NOT support the notion that the net ground reaction force is perfectly aligned with the midplane of a bike, if the mass of the bike is distributed evenly along its height, as in a uniform rod. The same would be the case if the bike were modeled as a uniform plate

The shape and mass distribution do not enter into the linear momentum balance, and since the weight and applied forces remain the same, so do those equations. The only difference is in the angular momentum balance, which produces the slower acceleration.

At long last, this means that the ground reaction force, combined with a finite trail, can generate a steering torque and cause the front wheel to steer towards the direction of the lean.

One thought on “Calvin Continues His Campaign”